The duty and responsibility of building, operating, and administering the e-Government Portal have been assigned to the Ministry of Transportation on behalf of Prime Ministry by the decision 2006/10316 of the Council of Ministers dated 24.03.2006 promulgated in the Official Gazette issue no. 26145 dated 20.04.2006. Pursuant to aforementioned decision of the Council of Ministers and the Prime Ministry Circular no. 2006/22 promulgated in the Official Gazette issue no. 26255 dated 10.08.2006, the efforts for reviewing business processes for offering public services in a citizen-oriented manner in an electronic environment and on a common platform, and for content management, standards related to integration, and the necessary arrangements are being conducted by Türksat Uydu Haberleşme Kablo TV ve İşletme A.Ş. under the coordination of the Ministry of Transportation and with the effective participation of the relevant public institutions and organizations.

e-Government means presentation of services offered to citizens in electronic environment. Thus, the objective is to deliver the government services to citizens by using the easiest and most effective way in a high-quality, fast, uninterrupted, and secure way. The objective of the understanding of e-government, which has begun to take the place of concept of bureaucratic and classical state, is to achieve the easy access of every entity and every individual to government bodies and to services provided by government bodies by means of information and communication technologies. 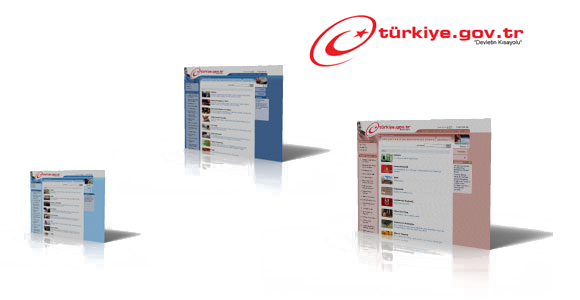 The e-Government Portal is a platform enabling the presentation of public services from a single portal and users' access to Government services through an electronic environment in a secure and effective manner. Thanks to the e-Government Portal, serving through the www.turkiye.gov.tr address, it is now possible to access many public service from a single point and a single identity verification.

The objective is to create an e-Government architecture which is in compliance with EU's standards on information society and e-Government and more advanced in terms of both technology and quality as well as to carry out the necessary work for offering services to citizens on an uninterrupted and 7/24 basis. In order to ensure that all users benefit from this technology at the same rate, the e-Government Portal involves the efforts about technique, design, and content to ensure the accessibility and availability for disabled citizens.

The e-Government Portal, which is a significant milestone of Turkey's transition to information society, has been commenced by Mr. Prime Minister on December 18th, 2008.