He was appointed as Türksat Satellite Operations Deputy General Manager on February 9, 2017, and CEO of Türksat on January 21, 2021.

In 2006, He joined Türksat A.Ş. as a specialist and took part in the Turksat 3A Satellite Project Technology Transfer Program in France as a data processing and satellite software manager in 2006-2007. Between 2014-2017, he worked as Research Development and Satellite Design Director.

He was a database specialist for a retail company in New Jersey, US in the beginning of his career. Prior to 2006, he worked as a software engineer and manager in the field of telecommunications in the US.

He is a graduate of Hacettepe University Electrical and Electronics Engineering Department in 2000. In 2003, he received his master's degree in Computer Science from New Jersey Institute of Technology in the United States. He is currently pursuing his PhD in Computer Engineering at Yıldırım Beyazıt University. 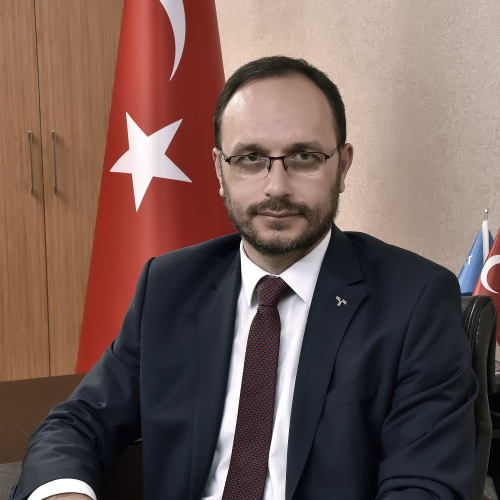 After completing his primary, secondary and high school education in Çorum, he graduated from Istanbul University Computer Science and Engineering. He completed his master’s degree in the field of Computer Engineering at Gebze Technical University. He is currently working on his doctoral studies at the same university. In 1998, he started his professional career in the private sector in Istanbul. He became an IT manager in 2001.

Çerikçi is the Türksat Legal Counsel since 2014. Currently, he is the Chairman of the Access Providers Association and member of the RAYSİMAŞ Rail Systems Engineering Consulting Inc. Board of Directors.

He started his professional career as a freelance lawyer in his own office in 1997. After having working for 7 years, he worked as a Specialist Lawyer in Türksat Legal Consultancy in 2005. He also served as manager responsible for litigations at Türksat. He served as a consultant in the TBMM between 2010-2014.

A graduate of Ankara University Faculty of Law he has a Notarial and Mediator certificate.

A graduate of Marmara University Faculty of Economics and Administrative Sciences with a bachelor’s degree in Economics (English) in 2003, Çavuşoğlu started his career at Kombassan Kâğıt A.Ş. between 2002-2003. Between 2004 and 2013, he held various positions at General and Regional Directorates of Kuveyt Türk Participation Bank. Finally, he worked as the Central Anatolia Region Credits Manager of the bank between 2012 and 2013. Joining Türksat in 2013 and serving as Finance Director until 2017, Çavuşoğlu was assigned as Deputy General Manager of Administrative and Financial Affairs on December 22, 2016.

He started his career as an auditor in 1997 at the Ministry of Agriculture. Prior to joining Türksat, Çavuşoğlu was the first public internal auditor assigned to TÜBİTAK where he served as the Internal Audit Director between 2005 and 2014.

Dr. Demirel has been assigned as the Deputy General Manager responsible for satellite communications services on January 29, 2021.

He started his career in 2006 as a specialist in Türksat A.Ş. Between 2006-2008, he was the Satellite Electric Power Systems Specialist in France within the scope of the “Türksat 3A Satellite Project Technology Transfer Program”. He took part in satellite design activities within Türksat R&D and Satellite Design Directorate and in the management of installation and acceptance processes of USET, which is the only satellite assembly, integration and test center of Turkey.

Between 2014 and 2021, he conducted Türksat 5A, Türksat 5B and the first domestic communication satellite Türksat 6A satellite programs as Türksat Satellite Programs Director.

Between 2014 and 2021, he directed satellite programs for Türksat 5A, Türksat 5B and Türksat 6A (the first domestic communication satellite) as Türksat Satellite Programs Director.

After graduating from Karadeniz Technical University, Department of Electrical and Electronics Engineering in 2001, Ahmet Selami Söğüt completed his master's degree in Business Management at Beykent University in 2014.

Söğüt, who started his career at Istanbul Metropolitan Municipality (IMM) İsbak A.Ş. in 2001, worked as an engineer in Signaling, Communication and Image Systems, Camera Systems and R&D departments, and then was appointed as technical manager to İsttelkom A.Ş. in 2014. He worked as the Electronic Systems Manager until the end of 2019 in the IMM company, which manages the installation, maintenance and repair of IOT and radio systems, fiber optic lines and network systems throughout Istanbul, and took an active role in many technical infrastructure projects in IMM subsidiaries, where he worked for 18 years.

Since January 2020, he has worked as the General Manager at PTT Kule Transmitter Tesisleri AŞ, which is authorized to provide communication services to GSM operators, Internet Service Providers and OKTH service providers in addition to radio and TV broadcasters. He also managed the establishment and commissioning of the technical infrastructures of Çamlıca and Çanakkale Towers.

Söğüt, originally from Gümüşhane, is married and has 3 children.